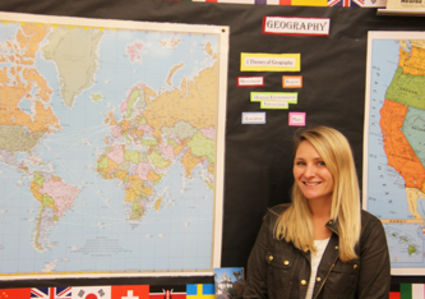 Broadus welcomes three new teachers this fall. The teachers will instruct students in 5th grade, 6th grade, and JH/HS Social Stuidies & History. In the paragraphs below The Examiner took a little time to get to know the new teachers, and introduce them to the community.

5th grade teacher Jennifer Grothe (pronounced Growth E) may hail from Eastern South Dakota, but her heart has always been in the West.

"I've always loved The Black Hills and the West, so coming out here was a good transition," she said during an interview Monday.

Jen is originally from the Sioux Falls, South Dakota, area, and went to school Brandon, SD, which has a 2016 population of 9,923. The 5th grade teacher went to college at Augustana University, in Sioux Falls, where she received her Education Degree, and then taught Kindergarten for two years in Brandon. The lure of the Plains then drew Grothe west, taking her to White River, SD, to teach 3rd Grade, which she did for three years.

With the opening in Broadus, Grothe then decided to make the move to Montana, but not without some hesitation. "I loved teaching in White River, the kids were awesome," she said.

"When I got to Broadus, I realized I'd made the right decision. People here have been so welcoming; the parents and other teachers have been so helpful."

Grothe's plans for the 5th grade include keeping some old traditions, such as the Unwax Museum and Christmas Cards in the Examiner, while bringing in a few new projects of her own. She plans to encourage and incorporate hands on activities and project-based learning, for example the "Pumpkin Olympics", where students will team up and make miniature catapults out of popsicle sticks, and compete to fling candy corn pumpkins over a variety of obstacles.

"These sorts of tasks test the student's critical thinking and encourage creativity," Grothe said of the project.

Grothe finished, "I'm excited for the year, and excited to be here. Everyone here has made it an easy transition."

Thirteen students are currently enrolled for 5th grade in Broadus.

6th grade teacher Caroline Johnson may not need much of an introduction to the community; instead a re-introduction is in order. Johnson has previously taught in Powder River County, in several roles. as a Kindergarten Aide with Mrs. Isaak, student teaching under Mrs. Mulder?????, as well as teaching 5th grade, and teaching in Biddle.

Caroline began her teaching career as a Kindergarten Aide for Mrs. Isaak, which sparked her interest in the field, and led to her receiving her teaching degree from Black Hills State University. During this time, Caroline did her student teaching under Jess Mulder, and subsequently taught 5th grade, as well as in Biddle.

Johnson took time off for her other love, being a mom, but with two of her and husband Dan Johnson's three daughters now graduated from High School, Caroline is excited for the opportunity to get back to teaching.

Johnson says there's "more to education that sitting behind a desk," and encourages an active learning style and getting everyone engaged. One program she's looking forward to is the "Step Up Writing" program, which improves written communication skills; an often-overlooked skillset in today's world, where a great deal of communication comes via email or text; in written form. "Being able to write competently opens doors for creativity, and this program incorporates reading and writing, which helps even more with creativity," Johnson said. Caroline is excited to be back in the classroom, and looks forward to teaching the seventeen students currently enrolled for fall.

For years, the students of Broadus Junior and Senior High have been blessed with an incredibly talented Social Studies teacher, in the form of Jesse Barnhart. A popular teacher who taught several generations of PRCDHS students about the mountain ranges of Montana and the battles of Rome, and demonstrated how Montanans from the primordial past took down their food with an atlatl. Any teacher who replaced Barnhart had big shoes to fill, but PRCDHS may have found that person, in a lady named Rebecca Boman.

While student teaching under Barnhart this spring, Jesse realized that the talented lady would be a great fit in the community, and when former PE Teacher Tyson Budler left after his first year, Barnhart was hired as the new PE Teacher (which he has experience with in the past), while Boman was hired to teach 7th grade Geography, 8th grade Early American History, 10th grade World History, 11th grade Modern American History, 12th grade PAD (Principles of American Democracy), and Psychology, which Budler had taught last year.

Boman's experience around the world translates well to her subjects: she grew up experiencing many corners of the world, as Rebecca's dad was a fighter pilot in the Air Force. She has lived in nine countries and traveled to 42 countries. This means that Rebecca has been able to experience many of the subjects she now teaches about; a resource which may prove invaluable. When one's teacher not only knows the subject but has also, "been there, seen that, took a selfie there," it can make a dreary lesson about history into a real connection for the student.

Boman completed her Bachelor's degree from George Mason University, majoring in Government and International Politics, with a Minor in Global Affairs. She interned at Parliament in London, and worked at the American Embassy in Ukraine, learning the Russian language along the way.

Boman then moved to China, where she worked to teach English. This was where her passion for teaching kicked off, and Boman began to pursue her degree in Teaching, graduating this spring from Western Governor's University with a Master's in Secondary Education. 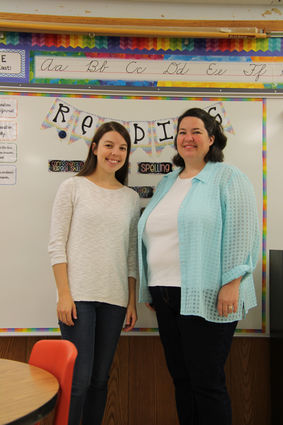 While living in China, Boman took a trip to South Korea, where she met her husband Devin, who was stationed there, courtesy of the US Army.

The couple now lives on the Mangen Ranch, where Devin works as a hired man. The couple has two daughters, Reagan, age 3, and Thea, age 1.

"I love hunting and camping, so this is a great place for us," Boman commented. "Growing up and moving around, I was never able to put down roots; I'm excited for my kids to have that opportunity.

After student teaching this spring, Boman knows a number of the students, and plans to bring her worldly experiences to her teaching. "I want to bring the students a deeper appreciation for life and what all is out there; to bring the world to them."

School began on Wednesday in Broadus.