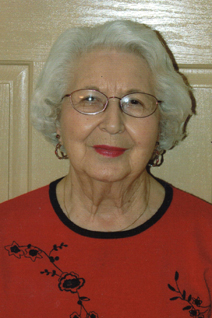 BILLINGS - Mary Kathleen (Trucano) Latta was a devoted mother, grandmother, great-grandmother, sister, aunt and friend. She will be greatly missed by all who loved and knew her.

Mary Kathleen, "Kay" as she was fondly called, was born on a ranch in Eastern Montana to Adeline Visintainer and James Trucano on Aug. 11, 1921. She attended first through eighth grades in a country school in the Boyes, MT, area. She graduated from Powder River County School in 1940. After graduation, she attended business school in Bismarck, ND. Returning to Broadus, she ran for Powder River County Treasurer in 1942 and lost by only eight votes.

In 1943, Kay went to Brighton, CO, and was employed by Great Western Sugar Company, where she met her husband, John Russell Latta. They were married in September of 1946. Soon afterwards, John and Kay moved to Garden City, KS, where their three oldest children were born. In the late winter of 1959, they moved to Swink ,CO, where Mark was born. The family of six moved to Billings in the fall of 1959. Except for a few years in the 1970s when Kay and John were transferred to Bismarck, Kay resided in Billings.

Kay was at home with her family for many years; then began selling Avon. She went to work at St. Vincent's Hospital for a brief time, and then worked for 18 years at Eastern Montana College, now MSU-Billings. She worked in the Special Educ. Dept. and the Placement Office. Kay retired in 1987 and was a caretaker for her husband for nine years before his death in 2002.

Once retired, Kay became an Associate Sister of Charity and was an active volunteer at St. Vincent de Paul for many years. She also volunteered at St. Vincent's Hospital, most recently in Spiritual Care. She and her friend Bonnie Herminghaus received fifty-year honors for volunteering.

Kay was a superb gardener. Her specialty was roses and, at one time, she had over a hundred rosebushes in her yard. She had an artist's ability to "carry" the distinct shades of a color in her head as she went about decoration of her home and garden. As an astute shopper, Mom retained her ability to do rapid numerical calculations until the end of her life. Kay also took many trips in her later life, especially those to the states where her children resided. Twice she traveled to Italy, the birthplace of her grandparents.

Kay was a devout Catholic throughout her whole life. To her, faith meant actively sharing her talents and treasures with all, especially those for whom life had dealt a difficult hand. Mom was a devoted mother, and her grandchildren and great-grandchildren were the joy of her life. The wonderful food, flowers, prayers, energy and love she showered upon us will never be forgotten.

The family wishes to thank our mother's medical staff and caregivers for he devoted and compassionate care.

Condolences may be made at http://www.michelottisawyers.com.