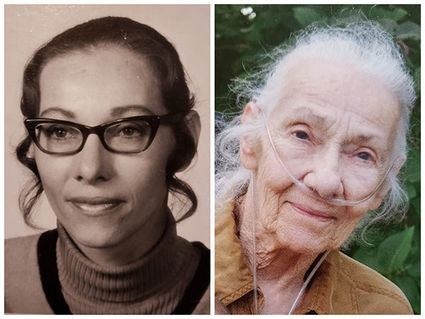 Inge was born in 1934, in Stainislau, Poland to Otto Peter Kotarba and Cacilie Schindelar-Tkaczyk. During World War II, her family was relocated to Germany. As a child she witnessed the firebombing of Dresden while in a refuge train and thought the bombs looked like Christmas trees falling from the sky. She didn't know of the firestorm and complete devastation that enveloped the city, or her country, until much later. She eventually married an American military man, Clarence Popelka, and immigrated to the United States.

Inge raised five wonderful kids with divergent interests and belief systems. Although she lost her eldest son to a drinking and driving accident when he turned 21, her other children graduated college and were professionals in the field of education.

After her divorce from Clarence, she graduated from Black Hills State University in 1976, with a teaching degree. Inge then became a full-time teacher of English and German classes at Powder River County High School in Broadus, Mont., for 17 years. She was also assistant speech and drama coach. After retiring from teaching she moved back to South Dakota and went on to work as one of the librarians at Grace Ballock Memorial Library in Spearfish.

Inge was an avid birdwatcher and her favorite birds were bluebirds, chickadees, flickers, orioles, and wrens. She loved nature, and relished gardening and house plants. Inge was also a voracious reader and could burn through several books every week. During her last two years, she loved and read all the novels of Lindsey Davis, whose stories featured a fictional detective solving cases in the historical backdrop of Ancient Rome. Inge's favorite poem was "The Cremation of Sam McGee," by Robert W. Service, and her favorite play was "Inherit the Wind," by Jerome Lawrence and Robert E. Lee.

Inge was a staunch member of the Democratic Party and was never shy about sharing her opinions. Her biggest fear was that the polarization of American politics could lead to what she witnessed and lived through in Poland and Germany during World War II. She was a strong advocate for human rights and respected all cultures, philosophies, theologies, and beliefs of the one race that matters: the human race. Per her wishes, there were no funeral services and she was cremated.