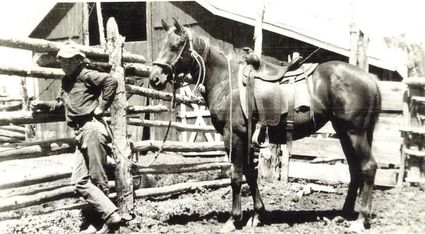 Everett was born on March 16, 1920 in Moose Jaw, Saskatchewan, Canada the second oldest of five children, of Illinois-raised parents, Edward Alexander and Edith Mae (Haldeman) Hanlan. Everett lived and went to school in Canada until he was 10 years old. The farm where the family lived neighbored with Germans, Scotch and Irish. They were all good neighbors. This is where Everett learned to take care of livestock at a very young age. By the time he was 8 years old, he and his slightly older brother were milking cows and taking care of them. He attended the first three grades in Canada and in 1930 the family moved down from Canada to south of Gillette, WY, which was a great undertaking, but well planned. Everett's mother and four children with their things rode in one railroad car. His father and three teams of mules, their gear and the machinery rode in the other boxcar.

Everett's summers were spent working wherever there was a job. He worked with haying crews from Recluse to below Moorhead. He started working for Charlie Berry in the spring of 1940and it was during this time he met Charlie's granddaughter Emerine Lanham. As time went on, he was working more with cattle as the market for horses was dwindling. For a few weeks in 1940, Everett helped a neighbor, Clyde Sullivan move from Bitter Creek to the north of Glendive. They trailed livestock and pulled wagons loaded with belongings down the Powder River and cross country; was a long trip, but met a lot of good people along the way.

In late April 1942, Everett left for Gillette for service in WWII. He took his physical in Cheyenne and went to Fort Riley Kansas. While in Kansas he crossed the bridge to Missouri just to say he had been there. Everett was attached to the 1st Calvary Division. From Kansas he was sent to Fort Sill Oklahoma. He spent two months there. Among the duties was taking care of horses. His next move was to Fort Bliss Texas. Everett had one furlough during this time. He went home to Wyoming. When he arrived in Gillette, he and Emerine drove to Broadus and were married in 1942.

The war called and Everett and the 61st Battalion left Fort Bliss and headed for Australia and upon landing in Brisbane, Australia the "Aussies" gave them straw for mattresses and two more blankets apiece. While in Australia, the 1st Calvary Division continued to get equipment, supplies and information together. Most of the soldiers got a few days off, Everett and some friends from A Battery got a chance to go riding; they saw lots of unusual birds and Koala bears. Shortly before leaving Australia, Bob Hope entertained the troops. Everett had an opportunity to visit with him after the performance. He was very impressed with Hope's attitude toward the serviceman.

From Australia, the 61st went to New Guinea to begin island hopping to Manilla. From the toe hold, the Division moved to the Admiralty Islands, landing at Las Negros in February 1944. Against great odds, the Momote airstrip was secured. The Japanese troops were thrown back and the Division moved to Leete and other areas, finally forcing its way onto Luzon. After landing in Lingayere Gulf area in January of 1945 the Division fought its way as "flying column" to Manilla to help free civilian prisoners that were being held captive at the University of Saint Thomas. The flying column was heavily composed of volunteers. Everett and another man from A-Battery volunteered and went along as "sharpshooters." It was a successful mission, but an exceedingly dangerous one. By the end of 1945, the Philippines were under U.S. control and the Japanese were driven back. The 1st Calvary landed in Japan on September 8. Everett had enough merit points, as well as twelve points for a child at home, to be discharged in September 1945. Everett always said, "We weren't heroes, just did what needed doing."

During Everett's time in the service Emerine began teaching rural school on Bitter Creek. She was able to buy a small ranch from one of the retiring neighbors. When Everett returned home from the service in 1945, they continued living on this ranch. He also worked for one of the neighbors. In late fall of 1946, Everett sold the small ranch and bought a bigger one on Butte Creek in Montana.

Everett and Emerine raised two daughters, Evelyn and Pat. The girls developed good work ethic by helping with the ranch work and doing chores. They enjoyed riding and working with the cattle. Everett bought a truck and did a lot of trucking over the years. He often took the family along on these road trips. Everett raised cattle and some wheat in the early years.

The Hanlan's always enjoyed music. The jam sessions at the Cashway Truck Stop Café were very special to them. Everett and Emerine also enjoyed going to local rodeos. Everett enjoyed the Butte Creek neighborhood where most of the people were homesteaders or descendants of. Everett was well respected for the quality of his cattle herd. He worked hard and was a good neighbor, helping others when help was needed. The ranch was sold in January of 2005. It was a difficult decision, but it was time. Everett and Emerine bought a house in Broadus where they resided until due to health reasons they moved into the Powder River Manor.

Everett is survived by his two daughters, Evelyn Kraft and Pat Hanlan both of Broadus and numerous cousins. He was preceded in death by his parents, Edward and Edith; his wife, Emerine; two brothers, Floyd Hanlan and Raymond Hanlan; two sisters, Viola Ballard and Alberta Hanlan; one son-in-law, Dan Kraft and one sister-in-law, Nova Hanlan.

A funeral service will be held on Saturday, December 22, 2018 at 11:00 a.m. at the Powder River Congregational Church in Broadus, MT. Interment with full military honors will be held at the Valley View Cemetery in Broadus. Should friends' desire memorials can be made to the Broadus Volunteer Fire Department P.O. Box 659, Broadus, MT 59317. Condolences can be made to the family by visiting http://www.stevensonandsons.com.