The waters of Pilgrim Creek back up behind and wash out the East Powderville Road, in this photo taken northeast of Broadus on Monday.

Over the past week, Powder River County has seen a major side effect of the deep snow deposits left during February – flooding.

The effect comes on slowly, first beginning with a trickle in the tiniest rivulets, high in the hills. As the water descends towards the Gulf of Mexico, it picks up power as those rivulets become streams, and eventually become torrents, washing out dikes, dams, and roads. Alternately, the water may serenely expand out over an area once thought un-floodable, only to find its way into resident's basements or flooding a corral, so fresh baby calves chill down in the cold water and perish.

This tale as old as time has been playing out over the last week, as temperatures finally rose towards seasonal averages, breaking Winter's grip on the area. Broadus saw its first average high temperature in over a month on March 20th, as the thermometer hit 51 degrees. Prior to that date, the average high had been below average – often by 30 degrees or more, since the first week of February. On February 13th, Broadus did hit its average high, but otherwise February averaged 19 degrees below average.

What these cold temperatures meant in practice is that no thawing occurred for the deep snows deposited in February. With temperatures finally warming, the frozen ground couldn't accept the moisture, so the moisture headed downstream.

With major drainages running at capacity, old timers have commented that this spring's runoff is as much as they've seen in a lifetime.

Perhaps our saving grace has come from the runoff taking place over the course of a week or more. If the temperatures had gone from below zero lows to 70 degree highs over the course of a few days, our flooding might look more like that of Nebraska, which has been absolutely inundated with water; a great number of livestock and homes were lost.

While it's still too early to officially tally the losses in our area, here's what we know so far: as of Tuesday, March 26th, many area drainages have peaked and begun to subside, and loss of stock appears to be fairly minimal, with one report of lost sheep due to river flooding north of Broadus. There have been some flooded basements, but we've not heard of any loss of residences.

Widespread reports of flooding have come in from all corners of the county, with areas in Eastern Powder River County perhaps receiving the worst flooding, both due to soil conditions and snow loads. Areas along Mizpah and Pumpkin Creek, which both drain many miles of country, also saw a great deal of runoff, while to the west, Otter Creek and the many tributaries draining towards the Tongue River saw an enormous amount of runoff.

Stock dams and irrigation dikes have been stressed to the max with the runoff, with many ranchers having to cut dikes (losing precious water in the process) to prevent the dikes from washing out on their own.

Meanwhile, flooding on the Little Bighorn River shut down I90 at Crow Agency, and Hwy 212 was closed between 59 North and Crow Agency.

In Broadus, flooding was most extensive in the White Buffalo Campground area, down towards Alderman Oil and around Jim Hansen's house. The Broadus Town crew was able to create a ditch to allow some water to flow to the low area around the park and thus through town out into Talcott's. The city also channeled water near Hansen's so as to flow through a culvert under the highway, out through Allen Drane's yard, and after a ditch was cut across South Lincoln, out towards the river.

Last week, the river ice went out, causing jams in several areas, including an extensive jam on Gay's, south of Broadus. Within a couple days the river had expelled the ice downstream, only to grow large from runoff.

The Little Powder in particular has seen some extensive flooding, with a discharge of 2640 cubic feet per second measured at the Weston, Wyoming Gauge Station on March 22. The mean for this time of year is around 31 cfps. From there, the Little Powder only got bigger, and by the time it dumped into the Big Powder north of Broadus, the Little River was really flowing. Unfortunately, no measuring devices sit on the Little Powder below Wyoming.

What we do know is that the gauge station at Locate registered measurements of 19,400 cfps on March 24. Those are the sort of measurements usually found on rivers the size of the Yellowstone.

The Moorhead gage site is still iced up, according to the USGS waterdata site, so no flow measurements are available.

The flooding has caused people to re-evaluate the potential for flooding, with thoughts now on the future – perhaps installing more culverts, diking up land to change flow patterns, or moving livestock away from potential floodwaters ahead of time.

On Monday, Powder River County Commissioners issued an emergency flood declaration, while the Town of Broadus issued a flood disaster declaration. Commissioner Lee Randall said that these declarations will free up funding from the State, and potentially from the Federal Government, to help pay for damage caused by the flooding. For instance, gravel and other materials to rebuild the roads may need to be purchased and trucked in. Road Department Supervisor Teel Mullanix said Tuesday that the county will have to put in some new culverts.

The emergency flood declaration is not without precedent in Powder River County – in 2015 an emergency was declared after a storm dumped 7 inches of rain on parts of the county, and the county was able to gain funds because of the emergency status. 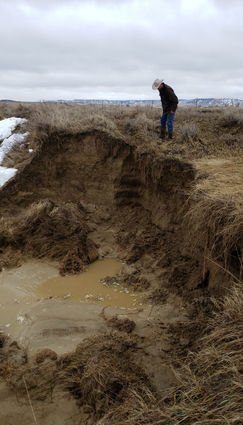 Mullanix commented that some of the washed out roads were at least in part due to approaches, where water built up and washed out the road instead of draining through the ditch. He urged landowners to go through the county to attain an approach permit when building roads, as some of the road problems could have likely been prevented with strategically placed culverts.

Mullanix also mentioned the county crew had built over 200 orange flags to mark washed out spots on the road, and even more were needed.

As of Tuesday, the waters have begun to subside throughout most of the county, though in eastern reaches of the county snow still remains, so some major drainages such as Crow Creek may still see the brunt of the runoff. Additionally, forecasts are for a spring storm later in the week which may dump more snow on the beleaguered, water logged area. "There's a lot of spring left," Lee Randall commented on the potential for more flooding.