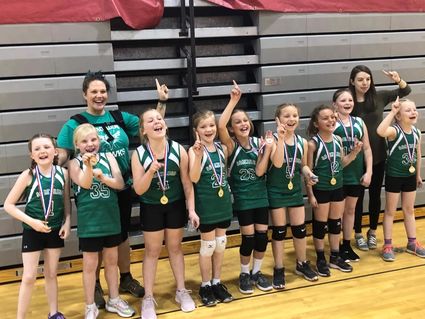 The U10 group with their medals. (Photo courtesy of Libby Nisley)

The Broadus Volleyball Club took 6 volleyball teams to Gillette last Saturday. This was the first outing for the U10 and U12 teams, and the second tournament for the U14 girls since they played in Miles City the weekend prior. Results for the teams are as follows.

The U10 team (age 10 and under), coached by Cody Kinzer and Jen Grothe, took first in the U10 Gold Bracket. They beat out a field including 8 other teams from Billings, Gillette, Casper, Douglas, Wright, and Sundance. These girls won their very first volleyball tournament (ever), which is absolutely fantastic. Congratulate Maddie Brownfield, Jordyn & Danica Schroeder, Addi Randall, Bonita Kinzer, Tenley Yonkee, Alexis Gotfredson, and Madisyn Kramme if you see them!

Broadus took two U12B teams to face a large division including 16 teams from as far away as Billings and Rapid City. Kimber Emmons took a group of 4th/5th grade students that competed well in the Silver Bracket but ultimately fell short of a win. Karli Collins and I also had a group of 4th/5th grade students who came into the Gold Bracket seeded first after a dominant performance in Pool Play. The team opened up with probably the best team in the division in Wright and squeaked out two close game wins, the second one winning 27-26 since the cap was 27. The team's fatigue caught up with them as well as a nagging injury and ended up losing to an also tough Gillette team to take Second Place. 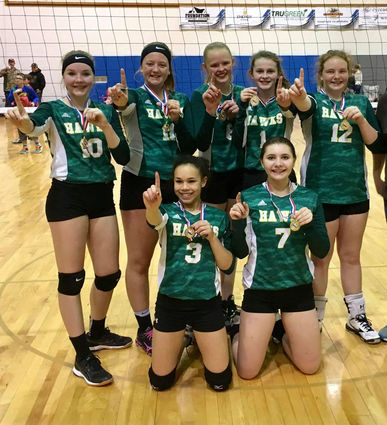 The U12A team, coached by Raevyn & Kylee Drane faced an incredibly tough task facing the best U12 teams from Gillette, Douglas, Billings, Casper, and Deer Creek Volleyball Club. They played with a lot of heart but lost out early in the Gold Bracket.

The teams will head to Sheridan next on April 13th and then end the season in Colstrip on April 28. Thank you to all who have supported us along the way, and especially all of the new coaches who have stepped up this year to help our club grow and thrive, serving the 47 athletes in 3rd-8th grade.