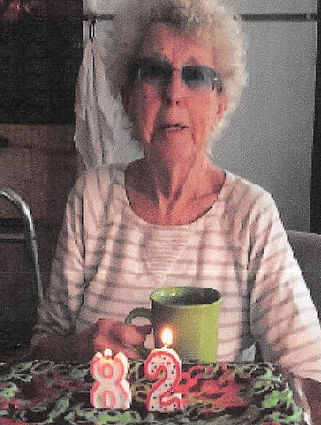 Darlene Grant, age 82, of Sheridan, WY, formerly of Broadus, MT passed away in her sleep on April 17, 2019, surrounded by her daughter and grandchildren who were singing hymns to her. She got to enjoy the end of her life, receiving back all the good that she paid out.

Ruth "Darlene" Grant was the daughter of Jesse William and Beatrice Bellemey Adair. She graduated from Riverside Polytechnic High School in Riverside, California. While waitressing in a small diner she met Willard Grant. They were married on February 8, 1957 in California. A short time later they moved to Broadus, Montana where they settled near the Grant family. Two children were born to this union, Robert Lloyd and Cynthia Kay. Darlene and Willard had some business ventures together. Their main company was Grant Trucking. They also had the Drive Inn in Broadus and the Cashaway Café and Station. Her proudest business was her flower shop in the mid-1980s. Darlene and Willard were prominent members of their community and church. She was a Sunday School teacher and stood up to sing song selections for the Assembly of God Church. They were also huge supporters in building the new "Assembly of God" Church; donating time, energy, service, and whatever they were able to help with.

Darlene's greatest roles in life were housewife, mother, and loyal friend. She was a good woman that loved her family, the Lord, and helping others. In her community she would help neighbors with their yards and minor repairs. Every Christmas she would have a baking day and her and her daughter would deliver treat plates to all of those without families around.

Later in life Darlene went to work for the Visitor Center in Broadus, before she pulled up stakes and moved back to California to be near her brother Jim. In September of 2017 until her death she resided with her daughter in Sheridan, WY. She was able to enjoy her last six months enjoying grandbabies and a dog. Things were never boring.