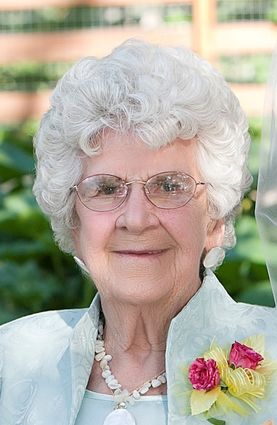 Gertrude "Gertie" May Webster was born on May 8, 1924 to parents Rose Worley Webster and Joshua David Webster. She was born at home on Box Elder Creek in Eastern Montana with the help of Mrs. Harvey as midwife. Gertie was the second youngest of eight children.

Gertie spent ages 1-18 on the ranch at Box Elder. She attended Climax Country School, grades 1-6, three miles from home as the crow flies, via horseback and by foot. When Gertie became a 7th grader her mother, she, Rose, Pat and Joe (the older kids had moved on) worked for her Dad on the ranch and moved to Ekalaka to attend school. Gertie graduated from Carter County High School at the age of 18 in 1942. After graduation Gertie and sister Rose moved to Miles City to work. They lived with sister Marie and her husband George Peters. Gertie and Rose were both employed at Foster Drug. Gertie was employed there until she met Alvin Andrew Cathey. Gertie and Alvin were married on June 19, 1945 at Broadus, Montana in a double wedding ceremony with Gertie's brother Pat and sister-in-law Ethel Nalley Webster.

Gertie and Alvin lived on the Cathey Ranch west of Alzada, Montana for approximately a year. During that year, oldest son Gerald (Gerry) was born in December 1945. Gertie and Alvin then moved to and worked at the Beilage Coal Mine owned by Alvin's grandfather Joe Beilage. The mine was located between Olive and Coalwood Montana. Alvin and Gertie continued to live and work at the mine during which time son Dennis was born in September 1947 and daughter Alveda was born in November 1950. Gertie and Alvin continued to live at the coal mine for about seven years then moved to Broadus for about a year and then to the Beilage place between the Cathey ranch and the Joe Zinni ranch. Gertie and Alvin lived on the Beilage place and raised sheep for about four years. Youngest child, William (Bill) was born while the family lived there in February 1958.

In 1959, Gertie and Alvin moved back to Broadus. Alvin drove truck and sheared sheep for area ranchers, Gertie took care of the home and ushered Gerald, Dennis and Alveda through high school. About 1967, Gertie and Alvin and youngest son Bill moved to the Hammond, Montana area and were employed on the Bert and Hattie Kaufman ranch and worked there until Alvin's death in 1973.

Gertie moved to Broadus where she and Bill lived while Bill finished high school. Gertie worked as a "jack of all trades" until 1977 when she married Bernard (Buster) Fruit. Gertie and Buster lived on the Fruit ranch on Pilgrim Creek until they retired and moved to Kalispell, Montana for a period of ten years. In 1990, Gertie and Buster returned to the ranch and lived there during the summers and spent winters in Arizona until Buster's death in April of 2001.

Gertie moved to Broadus and spent her days taking care of her home, quilting and playing cards at the Senior Citizens Center. In 2010, Gertie moved into Miles City and resided at Eagle's Manor. She especially enjoyed the days that music was played. In 2015 Gertie moved to Cottonwood Care Home where she passed away on June 12, 2019.

Family will receive friends on Monday, June 17, 2019 from 4:00-6:00 p.m. at Stevenson & Sons Funeral Home in Miles City. A Rosary will follow at 6:00 p.m. Mass of Christian Burial will be held on Tuesday, June 18, 2019 at 11:00 a.m. at St. David's Catholic Church in Broadus. Interment will be held at a later date in the Valley View Cemetery. Condolences may be sent to the family by visiting: http://www.stevensonandsons.com.

Should friends desire, memorials may be made to St. David's Catholic Church in Broadus.