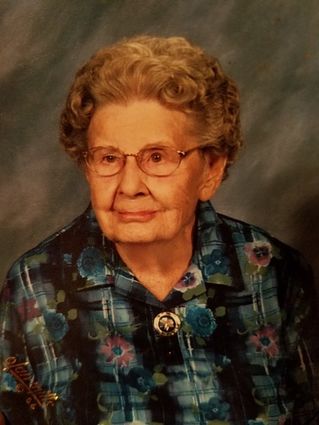 Helen (Miller) Pilster passed away on January 30, 2019 at her home in the Belle Estates in Belle Fourche, SD. Mary Helen Miller was born on November 5, 1918 in Wymore, NE to Marshall and Martha Miller.

In her early years, Helen became an elementary teacher who started in rural one-room schools in Nebraska with her dear friend and roommate, Esther Jones.

Helen married Ed Pilster on July 5, 1941. They made their home on the family ranch in Alzada, MT where they raised sheep and cattle. Their marriage lasted over 60 years. To their union, two sons were born. Larry was born in 1942 followed by Robert in 1946.

For many years, Helen baked homemade bread, churned butter and made cottage cheese from fresh milk produced by the family milk cow. She made the best chicken and noodles, deviled eggs, potato salad, and lamb and barley stew. There were always chocolate chip cookies, homemade pies, cinnamon rolls or some other delicious dessert waiting at her house along with a pot of hot coffee for anyone who showed up. One time during shearing, several of her oatmeal raisin cookies were fed to the family's lead sheep, Thumper. He loved the cookies but would spit out the raisins. She was furious! The grandkids would often keep it a secret from the others when she was baking cookies so they could eat all the cookie dough they wanted before anyone else showed up.

Helen enjoyed crossword puzzles and sewing until her eyesight no longer permitted it. She served as the resident seamstress whenever anyone needed anything patched. She created several outfits for the local Make It Yourself With Wool contest in the early 1980's. She also served as a teacher of Sunday School and Vacation Bible School.

Funeral services will be held at 2:00 pm on Saturday, June 29 at the First Congregational United Church of Christ in Belle Fourche, SD. Inurnment will follow the service at the Pine Slope Cemetery. Everyone is invited to join the family for a light luncheon at the church afterward. Condolences may be sent to the family by visiting: http://www.stevensonandsons.com.

Memorials may be made to the Alzada Volunteer Fire Department or Hospice of the Northern Hills/Spearfish.