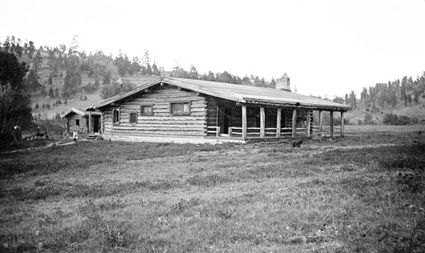 Ed: This is the first of an occasional column on local history, researched and written by Shane Dunning. Shane may be reached by emailing [email protected]

For many people, the name Buffalo Bill sparks thoughts of the quintessential American West. Those of us who live in these western states know "The Honorable William F. Cody" as a flamboyant and controversial showman, an Army scout and a hunter. In this area specifically, Cody's more famous exploits are an essential aspect of our local history. What is less known are the multiple tragedies that plagued his family life and how much of that played out here in Southeastern Montana and Northern Wyoming.

Buffalo Bill and his seven siblings lost their father at the age of eleven, an event partially blamed on Issac Cody's virulent antislavery activities in pre-Civil War Kansas. William was the only male sibling to survive to adulthood. Cody married Louisa Frederici at age 20 in 1866. They called each other "Willie" and "Lulu." They would have four children in all. Their eldest child, Arta Lucille, was born in 1866, followed by their only son Kit Carson in 1870 and daughter Orra Maude in 1872. The family eventually settled in the North Platte, Nebraska area in the 1870's, and established the famous Scout's Rest Ranch in 1886. Cody's youngest daughter, Irma Louise, was born in 1883.

Buffalo Bill and his wife Louisa may very well claim the credit of having America's first tabloid marriage. Throughout Cody's showman years, Louisa heard near constant rumors of infidelity while she stayed at home with the children. Cody acutely wished to avoid the social stigma of divorce. The family was strained by their son Kit Carson's death from scarlet fever in 1876 at age five. Tragedy struck again when Orra Maude died in 1883 at age nine, although the death may have also had the effect of reconciling the Cody's marriage for a short while.

In North Platte, his eldest daughter Arta Lucille met and suddenly married a young Chicagoan from a wealthy family named Horton Sinclair Boal. Buffalo Bill was away with his Wild West Show at the time of the marriage. His first grandchild, Arta Clara Boal was born in 1890.

Prior to 1892 the Scout's Rest Ranch in North Platte had been ably managed by Cody's sister Julia and her husband Al Goodman. Lulu and Arta began pressuring Bill to make Horton Boal manager against his better judgement. Boal lacked the ability and experience to manage the ranch, Cody felt. "Boal is no man to run it" Cody wrote to his brother-in-law Al Goodman. In 1892, Boal was made manager, creating tension between Cody and the Goodmans.

This is the state of the family when Bill Cody begins his business interests in Northern Wyoming. He had been in the area in the 1870's as a scout in Crook's Army. In 1894 he arrives in Sheridan and first steps on the porch of the Historic Sheridan Inn. He partnered with George Canfield and the Sheridan Inn quickly became the social center of the area for hundreds of miles. The charm and showmanship of Buffalo Bill and his beautiful daughter Arta contributed mightily to the social and financial success of Sheridan.

Arta and her husband Horton Boal moved to Sheridan County in 1894 after an unsuccessful stint running Cody's North Platte ranch. Arta reigned as hostess at the Sheridan Inn and Horton established the 3X Bar ranch in the community of Slack, with range in northern Sheridan County and the Crow Reservation in Montana. In 1896, their son William Cody Boal was born.

In 1900, Arta and Horton purchased land in the rapidly growing Tongue River Valley in the cattle country near Birney in what was then Custer County, Montana. The area had been initially settled by William and Mary Linville. In the summer of 1900, the 3X Bar relocated to the East Fork of Hanging Woman Creek. Buffalo Bill gifted the couple a fancy cabin that was erected on a spring at the head of the creek.

Arta's social success in Sheridan was replicated in Birney. They became friends with local ranch owners like John B. Kendrick (of the OW Ranch) and George Brewster (of the Quarter Circle U). Birney resident Letha Ebaugh Salveson reported in her memoirs that Arta threw a grand housewarming party, including ice cream. The cabin, she recalls, was decorated with statues of Buffalo Bill and a life size portrait of the man himself. She found herself sitting on the porch

On a large arm chair upholstered in red velvet and I saw a brass plate on the back. I looked closer and saw what was engraved there: "The King of England Sat Here." I noticed there were other chairs like mine and read the different names on them. One was the chair the Shah of Persia sat in; another was the chair the Czar of Russia sat in; another was where Franz Josef of Austria-Hungary sat. Of course, these chairs were from the Buffalo Bill Wild West Show, which played before all the crowned heads of Europe.

Horton's lack of success running the Scout's Rest Ranch followed him to the East Fork of Hanging Woman. His employee, John Hudson "Shorty" Caddel, recalled of Boal, "he was a good man. A regular stranger to livestock, but he was a good man."

Despite appearances, Arta and Horton seemed to be having issues. Letha Salveson recalled Arta "stayed all summer at her ranch and spent the winter in Sheridan, then came out again next summer. Merton Edwards, in the book "Faded Hoofprint, Bygone Dreams" recalled that Buffalo Bill

...had a relative, some said a son-in-law, that was a cattleman over near the Otter Creek, that I knew fairly well. Lived there alone and run a bunch of cattle. Alone, I say he always seemed alone any chance I ever chanced that way. A quiet, morose sort of fellow..

On December 28, 1900, Horton Boal, along with his hired hand Shorty Caddel, were two of the eleven cattlemen who slaughtered 2,000 head of sheep at the head of Otter Creek. The raid, led by future Governor and US Senator John B. Kendrick, targeted a partnership of John Daut and R.R. Selway and is detailed in a book written by my father, Forest Dunning, called Slaughter on the Otter. During the days of the sheep raid, Arta was in Sheridan, putting on a play called "That Box of Cigarettes" at the Cady Theatre.