Hawk Football Faces Off Against Ekalaka 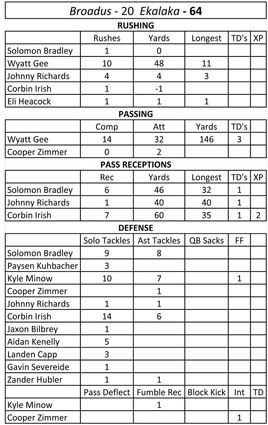 The Hawk football team traveled to Ekalaka last week, coming off a home win against Plentywood in the first game of the year.

Broadus Head Coach Ross Randall told us that Ekalaka has a big, strong team, and the Bulldogs used their size to their advantage to push the ball down the field against Broadus. Ekalaka ran for 441 yards against the Hawks, controlling the clock along the way.

Broadus was able to pass with some success, with Wyatt Gee throwing for 146 yards and three touchdowns. Gee connected with Solomon Bradley, Corbin Irish, and Johnny Richards for a touchdown a piece, throwing to Irish again for a two-point conversion.

Senior Hawk Linebacker Kyle Minow forced and then recovered a fumble inside the five yard line, just as the Bulldogs were about to score.

Though Ekalaka had some issues with penalties, racking up 7 for 60 yards, and threw an interception on top of the lost fumble, Broadus threw for two interceptions during the game.

Ekalaka's defense held the Hawks to four 1st downs, which also severely hindered the Broadus offense. Ultimately the combination of a strong rushing attack along with a tough defense caused Broadus to fall to Ekalaka, with a final score of 64-20.

Randall commented that despite Ekalaka's size and toughness, Broadus never gave up, and kept playing hard throughout the game. On the defensive side of the ball, Corbin Irish had 14 solo tackles, Cooper Zimmer had an interception, Solomon Bradley had 9 solo tackles, and Kyle Minow had 10 solo tackles to go with his forced fumble and recovery.

The Hawks travel to Scobey this weekend, where a limited number of Broadus fans will be allowed due to COVID-19 rules. Each Broadus player will have two tickets to give out to family or friends wishing to attend the game, and those fans will need to wear masks.

Scobey is 1-1 on the year, beating Circle last weekend 44-22, and losing to MonDak on week 1, 28-22. Randall said that Scobey is a tough team, but far different than Ekalaka. While Ekalaka ran a lot of option runs, Scobey will spread out the field and throw the ball.

The Hawks remain mostly healthy going into the Scobey game, with Dakota Holbrook expected to return after an injury last week.

Will the Hawks' speed suit them well against their Hi-Line opponents? Check out next week's paper to find out.