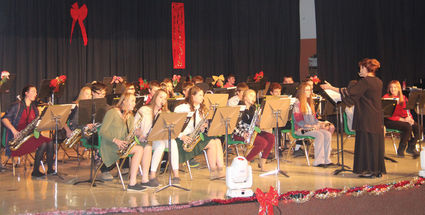 The concert began with the Junior High and High School Choirs joining together to sing On This Silent Peaceful Night by Jerry Estes. Maggie Mader put together a slide show to go along with the musical performance.

Next up, the Bells group, which plays a variety of really neat sounding musical bells, performed Christmas Holiday, arranged by Chris Brooks. Accompanying the Bells group was a rocking Santa Claus on the drums, played by Marcus Mader.

One Small Star, by Albrecht and Althouse was performed by the High School Choir.

The Junior High Band played three songs, A Christmas Classic, arranged by James Swearington, Christmas in Concert, by Feldstein and O'Reilly and Hark! The Herald Angels Sing, arranged by Elliot DelBorgo. The High School Choir then sang We Three Kings, arranged by Andy Beck, Simple Joy, arranged by Sally Albrecht, and Tell It on the Mountain, arranged by Lloyd Larson.

The Bells group wrapped up the evening with Deck Them Halls, arranged by Chris Crockarell.

Students participating in band and choir include: 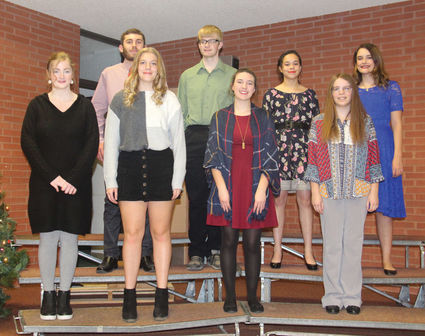