Lady Hawks win on the road 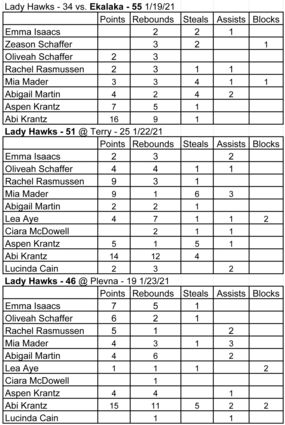 The Lady Hawks won two of three games over the last week.

Ekalaka demonstrated their experience early, going up 20-7 over the Lady Hawks after the first quarter, and leading 33-10 at the half.

Emmons continued: "They capitalized on any breakdown we had defensively, along with a few fast breaks that enabled them to take control of the game start to finish."

Abi Krantz led the Lady Hawks in scoring with 16. Krantz also snagged 9 rebounds and had a steal.

The Lady Hawks traveled to Terry on Friday, and came out to an early lead against the Lady Terriers. Emmons commented on the game: "We started the game with full court pressure and were able to maintain a 20 point lead from the 2nd quarter on. Terry is a very young and aggressive team that has potential to be competitive in the coming years."

Abi Krantz once again led the Lady Hawks in scoring and rebounds with 14 and 12. Mia Mader and Rachel Rasmussen both had nine points on the night.

Emmons went on to describe the Lady Hawks' second game of the weekend: "On Saturday we traveled to Plevna. Again, we began the game with some aggressive full court pressure. We got many steals that converted into 2 points and never looked back. I don't think that Plevna played up to their potential against us, but I also think we executed so many things offensively and defensively that they weren't prepared for what they got! I was very proud of the team's execution and enthusiasm on the court on Saturday, and I hope they can battle just like that again on Tuesday when we see them again at home.

Broadus won the game at Plevna 46-19, with Abi Krantz scoring 15. The second Plevna game which Emmons described took place this Tuesday, after our paper went to print. We will have information on that game next week.

The Lady Hawks currently sit at 5-3 in the conference as of Tuesday morning, in 4th place. Melstone leads the conference at 7-0, followed by Ekalaka at 6-2, and Jordan at 5-2.

Broadus plays at Wibaux this Friday, and Colstrip on Saturday.