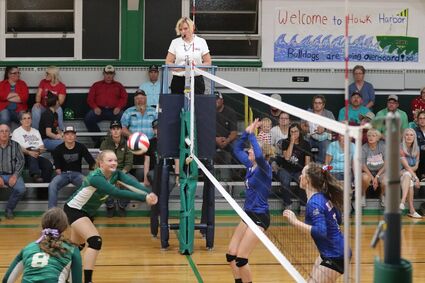 Aspen Krantz smiles as she digs up the volleyball in front of the home crowd, during the Homecoming win against Ekalaka. Krantz had seven kills in the match. (Photo courtesy Jacy Collins)

The Lady Hawk varsity squad faced off against Ekalaka last Thursday during Homecoming. A large cheering section of students were on hand for the match, as was a large contingent of hometown and visiting fans.

Broadus Head Coach Gordon Archer spoke about the match: "Our girls came out ready to play. It seemed like everything Ekalaka threw at us we had an answer for, and the cheering fans really helped our girls out for the win."

Broadus easily won the first two sets 25-17, 25-15, with the third set providing a more distinct challenge than the first two, as the Lady Bulldogs pulled close to a win.

"We didn't want to have a repeat of the first Jordan match," Archer spoke of the first meeting against Jordan this season at home, where Broadus looked poised to win in three, only to have Jordan come back and win in five sets. That was not to be the case at home against Ekalaka, as Broadus won the third and final set, 25-23, sealing the win.

That win put Broadus at 5-2 in conference play, trailing Circle at 6-0 and Jordan at 4-1 in the standings.

On Saturday morning at 7:15 in the morning, coming off a week of Homecoming activities, the Broadus girls hopped on the bus and made the trip to the geographical center of the United States, in Belle Fourche, SD.

Archer told us that the teams Broadus faced would qualify as B or A level teams in Montana, due to the size of the schools.

In the Lady Hawks first match, they faced Bowman, North Dakota, and though Bowman may have seemed a bit intimidating at first, Broadus was able to win in the second and third sets, with scores of 21-25, 25-22, and 27-25.

Broadus then faced off against the Sturgis Lady Scoopers, a Class A caliber team. The scores were once again close, with Broadus winning the first set 25-22, and Sturgis reversing the score in the second set. In the third set, the play came right down to the wire, with Sturgis pulling out a win 29-27 in an extra point affair.

In the final round of pool play, Broadus played the St. Thomas Moore Lady Cavaliers. St Thomas Moore is a private Catholic school in Rapid City, which was able to handle Broadus in two sets, 25-13 and 25-18. 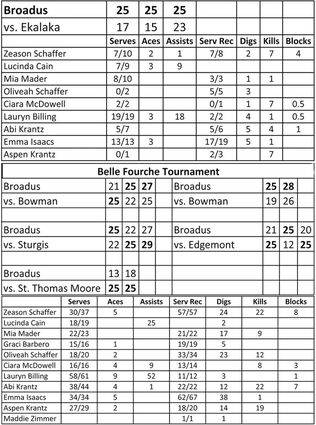 The Edgemont Lady Moguls played a tough match, with Broadus narrowly losing the first set 21-25 before storming back in the second set to win handily, 25-12. Edgemont was able to pull off the win in the third and final set 25-20, to set the Lady Hawks home with a second place win in the consolation bracket.

"Overall I think the girls played really hard," Archer noted. "They played competitively against a number of competitive teams, and even the sets we lost were mostly really close games."

Broadus goes on the road this weekend, with matches at Terry on Friday, and Ekalaka on Saturday.