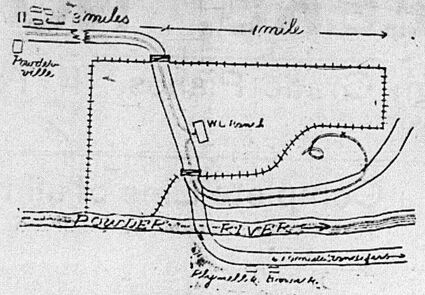 The hand drawn map pictured below was published in the Yellowstone Journal on June 13, 1903, depicting the site of Dick Standifer's death, near Powderville. The original caption read: "The cut was prepared by the Journal to give readers a general idea of the ground where the Standifer tragedy occurred. Some positions are exaggerated and other diminished for purposes of illustration, but the relative position of the important points can be gathered to a certain extent. The parallel lines running from Powderville is the road and the center line shows the course of the buggy in which Standifer and wife were riding. Where the buggy leaves the road is the spot where the fatal shot was fired, about a mile below the WL and 100 feet from the point marked X, near the fence, which is where Standifer fell from the buggy. The body fell 25 feet from the fence. The buggy tracks showed the short turn drawn, which was only nine feet across. Standifer's ranch from which he and his wife drove to Brown's in the morning, was on the same side of the river as Browns, 10 miles below." (Ed: below meaning downstream, to the right of the picture, or generally in a northerly direction.)

The term "Boot Hill" was commonly used for the cemeteries utilized when the deceased were violent criminals who "died with their boots on." The most common Boot Hill is located at Tombstone, Arizona, wh...