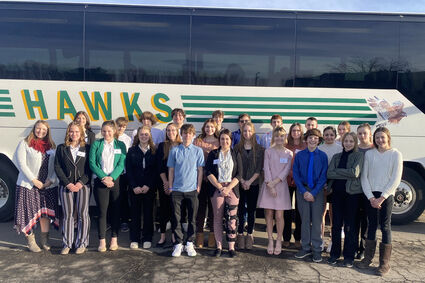 Our Broadus BPA chapter was a strong force in the state competition March 13th-15th. There were around 1,200 competitors from over 100 chapters at the conference. We had 10 students qualify for the National competition to be held in Dallas, TX on May 4th-8th, which is a difficult task indeed. Many of our students had a tough turnaround from State Basketball participation right onto the bus early the next morning to compete in BPA. These students are truly well-rounded individuals and I am proud of their representation of our school in so many ways.

Our BPA students will be doing some fundraising for their exciting trip to Dallas for Nationals. If you're interested in supporting them, contact any of those students qualifying for this prestigious conference including Lea, Becca, or Justin Aye, Marcus & Mia Mader, Lucinda Cain, Cooper Zimmer, Kayleigh Opstedahl, Kensi Emmons, or Kassie Hagedorn. You can also contact me as well. Thank you so much for your continued support!