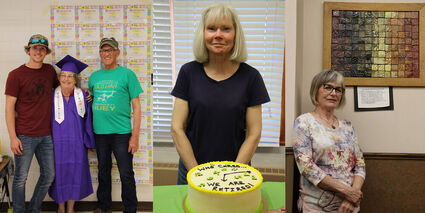 Broadus Kindergarten Teacher Paulie Isaak (below left, pictured with her son Dillon and husband Don), Third Grade Teacher Roma Rogge (below middle with a celebratory cake from the teachers and staff), and JH/HS Art Teacher Connie Barnhart (below right with one of her students' art projects) celebrated their retirement last week.

A group of Broadus teachers including Roma Rogge, Connie Barnhart, and Paulie Isaak packed up their teaching supplies and looked towards their future retirements. The three teachers combine for 124 years of teaching experience, having all taught for at least 40 years.

We sat down with each of the teachers to try and gain some insight into their longevity.

Paulie Isaak began teaching Broadus Kindergarteners in 1983, welcoming anxious youngsters to the public school system with her characteristic cheerfulness ever since. While attending a going away party for Isaak and Rogge last week, we heard how Paulie came to Broadus to interview for a teaching position, dressed up and prepared for a sit down, serious interview. When she arrived, she was met by a school administrator who was busy working in his garden. Shaking her hand with a grubby gardening hand, the administrator gave her a tour of the school, and promptly hired Paulie on the spot. The interview class she had paid to attend prior to coming to Broadus was apparently not of much use in the relaxed atmosphere of Southeast Montana.

Paulie told us that she had a number of favorite moments from teaching, and no doubt a career of Kindergarteners provides for many memorable moments.

One year at the Elementary Track Day, the Kindergarten class lined up for the relay race, and promptly began running the wrong direction, continuing all the way around the track, much to Mr. Coulter's dismay. The results were the same as if they'd gone the other direction, though the parents and staff got a kick out of the backwards race!

Now that Isaak has retired, she plans to move to Fort Wayne, Indiana with her husband, Don. There they plan to buy a house on the lake, and spend time with her grandson, Cole. She also plans on making more trips to Idaho to see her son, Dillon, who surprised Paulie with a visit on the day of Kindergarten Graduation.

Paulie told us that one of her proudest achievements was being able to teach her own kids, feeling lucky to have that opportunity.

Roma Rogge's calm presence has been an asset to generations of Broadus third graders, having begun teaching in the 1981-82 school year.

Rogge told us that teaching had undergone a lot of changes over the course of her career. For example, at one time the school experimented with shared classrooms, where the split classes of larger grades in the 80s would be combined for certain curriculum, and two teachers holding class together. The evidence of this teaching method is still evident in the Elementary library, where a screen may still be found on a track through the middle of the library. Instructors could teach individually to their classes with the screen separating the classes, then it could be pulled back to combine the class for cooperative work.

Over the years the curriculum has evolved, and with it the teaching styles, where Rogge continued to be a force of good for her classes over the years, influencing many students over the course of her career.

Roma told us that one of her more vivid memories was the fire at the Elementary Concert, which had been caused by a pile of rags in the Science Room. The fire occurred just before the concert began, when students were still preparing for the concert. The organized chaos of making sure the classes were accounted for and exited the school properly left an indelible memory. Apparently the sixth grade exited the back of the building and could not be found for some time, and parents sitting in the auditorium were at first not aware of the fire, which had become evident earlier to the students waiting nearer to the blaze.

Rogge plans to simply "relax" in her retirement for the time being, and tells us that the thing she will miss the most are the students: "The kids are simply the best," she commented.

Art Teacher Connie Barnhart began teaching in Broadus 38 years ago, having taught one year of art in Circle and two years of junior high art in Sidney, as well as two years in St. Labre after moving to Broadus.

In the ensuing years she has taught junior high and high school art, enrichment, photography, and even 7th grade math for four years. Connie has won multiple awards over the years, such as the 2020 MT Art Educator of the Year, and her students have won a multitude of art and cultural awards.

During a staff appreciation dinner held earlier this month, a video was presented which had been composed by Amy Minow, with input from two former Broadus students, DarAnne and Dawson Dunning. The sister and brother combo were a creative and scholastic force to be reckoned with when they were in school; DarAnne is now a lawyer in Helena and Dawson an award winning wildlife filmmaker based in Livingston. In the video presentation, the Dunning siblings commented on what a positive influence Mrs. Barnhart had been on their upbringing.

DarAnne explained: "In the end it's really not about the acrylic painting or the ceramic dodecahedron we created in her class....what I learned from Mrs. Barnhart wasn't just answers to memorize and regurgitate for a test. I learned ways of understanding and seeing and expressing myself. She taught us patience, persistence, problem solving, how to appreciate the little details, and how to influence the perception of those around us. And those are skills I use everyday, even if I haven't thrown a [clay] pot on the wheel since high school."

Barnhart told us she had many fond memories of teaching, such as the time she traveled to Hollywood with then student Ty Brewer, who had won a student design award and visited the opening of the Frank Lloyd Wright film by Ken Burns; Brewer and Barnhart were able to meet Burns at the premier.

In retirement, Connie's near term goal is to visit Europe this fall with her family. Son Elliot will be speaking at a scientific convention in Denmark, and as a gift he and his wife Abbey bought plane tickets for Connie and husband Jesse to tour Europe. They plan to visit the Netherlands as well as Germany during their travels.

Connie also plans to continue her artwork, setting up a studio at home. She is currently working on a portrait of a grandchild.

She commented on her years of teaching: "Thank you to everyone for allowing me to work with your children. The students' art allowed me to get to know the students better, opening up a window into their imagination and souls."

When thinking back on the three retiring teachers, we remember Paulie's wild Halloween costumes like the shower curtains, Roma's reassuring presence, and Connie's positive outlook towards creativity, amongst a host of other positive memories. We wish them the best in retirement. 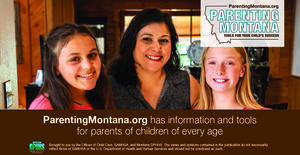