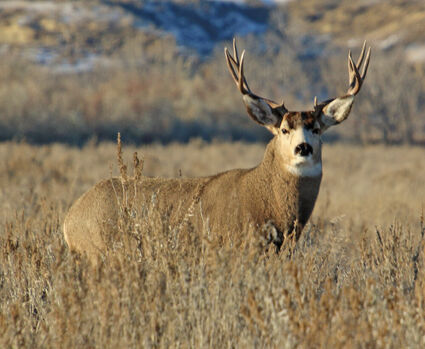 With the deer rut in full swing, swollen-necked bucks come out of the woodwork in their pursuit of does.

The weather for October in and around Powder River County was generally mild and warm, with a shot of moisture around opening weekend of the general deer/elk season.

The Fort Howes RAWS station had a high of 80 on the 20th, and a low of 22 on both the 27th and 28th. The station recorded 0.66" of precip in October, with 0.58" recorded October 23rd. The Fort Howes station had a relatively calm month in regards to wind speed, with only nine days recording speeds of 30 or more mph. The highest gust of the month was 38, on October 20th.

Volborg was the wettest station in the area in October, with 1.12" of moisture on the month.

The mild trend continued through the first nine days of November, with cold and snow then entering the picture. The Powderville 8 miles NNE station had a low of -16, on Veteran's Day, November 11th.