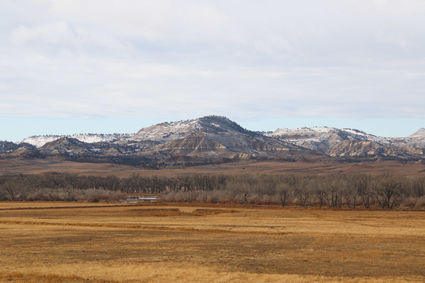 The higher reaches of Wolf Mountain sit under a light dusting of snow, while the lower elevations along Powder River are spared.

Mother Nature inoculated Powder River County with a mild dose of weather during the month of January, allowing the area to build up a bit of immunity for what will hopefully be an equally mild February. A good shot of warm weather was just what the doctor ordered, with the memory of the bone chilling cold and snow of last February and March still fresh on the minds of many native Montanans.

The mean temperature for January in Broadus sat at 28.4 degrees, or 4.9 degrees above normal. The warmest temperature of the month was recorded January 21, with a 54 degree reading at the Courthouse. Only one day in January had a single digit high, that 9 degree high being recorded on Jan 9th.

Perhaps the largest issue in January was not what fell from the sky, but what emanated from the soil. The warm temps made for muddy conditions, with ranchers trying to feed their stock early, while there was still some frost in the ground, lest they tear up the countryside in the hopeless quagmire of mud.

The low for the month came on January 15th, at -8, while the mercury dipped below zero on five separate nights over the course of the month. On two separate nights – 2nd and the 26th, the low stayed above freezing, with 33 and 38 being recorded, respectively.

Precipitation for the month lagged slightly behind normal, with .32" of moisture falling; the normal is .45". Most of what did come down was received as rain, here on the river.

In higher elevations, snowfall was more prevalent, but nonetheless light. The Sonnette 7 miles SW station recorded 7.8" of new snowfall on the month, with the highest amount, 3.1", falling on January 30th. The high for the month at that station came on the 21st with 56 degrees, the low of -12 on the 15th.

The Powderville 8 miles NNE station had a 51 degree high on the 21st, and as is often the case, had the lowest recorded official temp for the month in the area, with a -13 low on the 15th.

As a welcome to February, a snowstorm on February 2nd into early February 3rd side-swiped the area, depositing light amounts of snow in Broadus, with less snow further north and heavier amounts to the south; roads into Wyoming were treacherous at best on the morning of the 3rd.