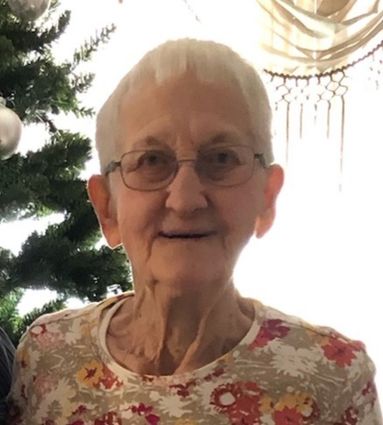 Anita Theresa Marie Wetherelt, age 87, passed away on Monday May 10, 2021 at the Campbell County Hospital in Gillette Wyoming.

Anita was born on April 14, 1934 to Louis and Anna (Caretto) Trucano at Boyes, Montana at their family ranch. She was attended to by the local midwife. She joined a family of three other siblings, Jack Mills, Catherine Trucano Giacometto, and Charles Trucano. She was the last surviving member of the family that settled in the Boyes Montana area. Anita grew up in an Italian Catholic family home which at that time Italian was the spoken language. She spent much of her time running the creek with the Capra children, riding horses, smoking alfalfa and many other adventures. When she went to first grade Anita did not know English so her new language began at the Boyes School. She spent her primary years at the Boyes School with the many family and friends nearby. When her high school years began she moved to Lead, South Dakota living with her Aunt "Kate" Caretto Manseau and attended her freshman year there. The next three years of school was spent at Broadus High School. She boarded with neighbors and friends during the week and would return home to the family ranch for weekends. Her Dad was often her driver of the 21-mile commute on Friday and Sunday evenings. Her grandmother, Teresa Caretto, also resided in the family home passing away in May 1952 just prior to Anita's graduation.

After high school Anita worked at the local drug store for Step/Ruby Holt in Broadus and worked for a short time at the Soil Conservation Service office. During Anita's later high school years she developed a friendship and love for Wayne Wetherelt Sr. This love was sealed in Marriage on December 31, 1955 and would continue for 65 plus years through thick and thin. She had a new family with all the Wetherelt clan, and she would love all of them like her own relatives. During these early years she and Wayne would board many of her nieces and nephews. Those that lived with them were Vivian Mills DeLeo, Jack (Slug) and Steve Mills, Louis, Lawrence, and Robert (Bob) Giacometto. Later there were Rick and Randy Trucano and Mike Capra. For these it became a secure and safe place away from home.

In 1958, Anita and Wayne welcomed their first child Brenda, 1959 Wayne Jr, 1961 Cheryl (Sheri) and 1966 Melody. As the children entered the world new love, compassion, faith, and strength made this woman what she was (a One of a Kind). The early trials with Brenda's health problems and eventual loss of sight helped form this woman to be a pillar of strength. She never lost sight of what the communities of Boyes and Broadus, family and friends did for her family during these trials with their daughter. In the mid 1960's she and Wayne purchased some land and began in the motel industry. With many good years at the motel during the oil boom she employed many young high school girls and women in the Broadus community; and she did the daily tasks of running the motel, including teaching her children how to work and do a good job. This was her life through the mid 1970's.

In the mid 1970's she worked with Wayne at the automotive store and later at the lumber yard store while still maintaining the family home. After leaving the work force she remained active in the community, encouraged her children, helped with her grandchildren. She was a wonderful wife, mother, gramma, sister, aunt, and friend to so many.

Anita was one of the founding members of the Nursing Home Committee that pursued each of their dreams and actively achieved the goal of building the Powder River Manor. She was fiercely staunch at this effort and any effort she believed in and was never afraid to stand up to anyone or speak her mind. Other committees and boards she was involved with were: Eastern Montana Industries, Tri County Special Education, Valley View Cemetery and St David's Altar Society. With every board or committee, she put all her heart in it and worked tirelessly for the benefit of others.

Through her lifetime the fun activities she was involved with was bowling, golfing, painting ceramics, watching her daughters play softball, watching the grandchildren with their activities and attending Bowling/Golfing Calcutta Auctions. She was such a good sport at bidding up people for the benefit of the event and she sure liked to win as well. She became "Mom", "Grandma" "Auntie" to so many of her children and grandchildren's friends.

In a break from the daily work, we could hear her say it's 5 o'clock somewhere. That was meaning for her to have her favorite alcohol beverage of a shot of Black Velvet and water backed. She was known to sneak away and have a cigarette after she "quit" many years ago. At a whim's notice she was known to dance on a table. Many times, after a Saturday night outing of dancing, visiting, etc. the party would continue at the family home for an early morning breakfast. Her children would wake up to a house full of friends and/or family. Throughout our lifetime we would hear stories of the many escapades she and dad were involved with. The tradition was carried on with Sheri and Melodie often bringing home friends for breakfast after Proms, dances, or the bar closing. Mom and dad would get out of bed joining us for food and laughter. Sometimes our mother was very vocal, and our dad would say "Nita". Family and friends remained an important centerpiece of her life. Each person young or old was important to her. Anita had a love for birds, bird houses and keeping her yard in good shape. The house and yard also became a collection of "witches" through the years. Often sons-in-law, friends and neighbors were the blame, but she took it all in magnificent stride.

Through it all she kept her faith and remained faithful to God and her church. Having grown up with church in the homes, community school or the local church she was served by two local priests Fr. Patrick Berther and Fr. Chester Poppa for over 70 years of her life. She could argue with them and give them her piece of mind but kept her love and faith.

Lastly this lady left a legacy of afghans to friends, family and through the many donations of afghans for raffles or fundraisers. She was always working on them even as her health or hands deteriated she kept persevering. On Mother's Day she gave an order of more yarn to her niece Roxy Giacometto Killens to pick up the next day. That order could not be fulfilled as God had other plans for Anita and as we walk through the house, we can find four different afghans that were in progress and were destined to some special person.

Visitation will be beginning at 2 p.m. on Friday, May 14, 2021. Rosary and Vigil will be at 6 p.m. at Stevenson's Funeral Home in Broadus Montana. Following the Rosary and Vigil there will be time for family and friends to share stories. Funeral Mass services at 11:00 a.m. on Saturday, May 15, 2021. Internment will occur at the Valley View Cemetery in the family plot.

Should friends desire, please make any donations to a memorial of your choice.