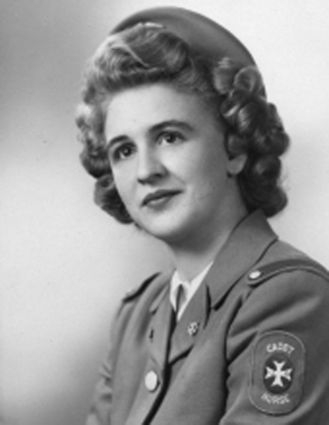 Verne Mildred Barthuly was born on March 10, 1926 on Butte Creek where her favorite Aunt Belle helped deliver her. Born the fifth of seven children to Clark Levi Rumph and Gertrude Schaap Rumph, she had four older brothers, Roland, Richard, Raymond and Robert, one older sister, Virginia, and one younger brother, Roger. Verne went to grade school in a one-room country schoolhouse on Butte Creek until she moved at age twelve to the school in Broadus, coming home to spend her summers at the ranch cooking for her brothers. She graduated from Broadus High School in 1944. Soon after graduation, her dad drove her to enlist in the Army Nursing Corps so she could attend nursing school at St. Vincent's School of Nursing in Billings, from which she graduated in 1947. It was a bold move for a country girl, but it would set her up for a fulfilling career as an oncology nurse at St. Vincent Healthcare using her servant heart and gentle spirit to care for and comfort patients and their families during some of their most difficult days.

While out with friends at the local bowling alley under the Babcock Theater, she met her soon-to-be sweetheart, Harry Barthuly. They fell in love and spent the next sixty-three years of their lives together. They had four children, Harry Clark (Clark), Carl Barry (Carl), Sylvia Lee (Sis) and Charles Roland (Chuck). They additionally opened their hearts and house to many who needed a place to call home. Summers were spent camping, fishing and traveling as a family, and after the kids were grown, they started expanding their travels to include destinations like Europe and Hawaii. Mom was an excellent cook and could magically find a way to make sure whoever showed up at the dinner table was welcomed and fed. She kept busy at home gardening, canning and quilting, and she loved playing pinochle with family and friends. She lovingly made each new grandchild a flannel quilt to be treasured forever. Verne was a charter member of Central Christian Church and was active in the church until Harry died in 2011. Shortly after his passing, she moved to Highgate Assisted Living where she lived for seven years. She then moved to Lasting Legacy in the Heights where she received wonderful care and was closer to family.

Mom was preceded in death by her husband Harry, four brothers and her son, Clark. She is survived by her sister Virginia, her brother Roger, daughter Sylvia (Ron), sons Carl (Coral) and Chuck (Kris), ten grandchildren, eleven great grandchildren, one great great grandchild with another coming in July. The family would like to thank the staff at Lasting Legacy and Riverstone Hospice for their loving care.

Cremation has taken place. A memorial service with reception to follow will be held on Sunday, May 5 at 4:00pm at Vineyard Church in Lockwood (1413 Rosebud Lane, Billings, MT 59101). In lieu of flowers, contributions can be made to the charity of your choice.